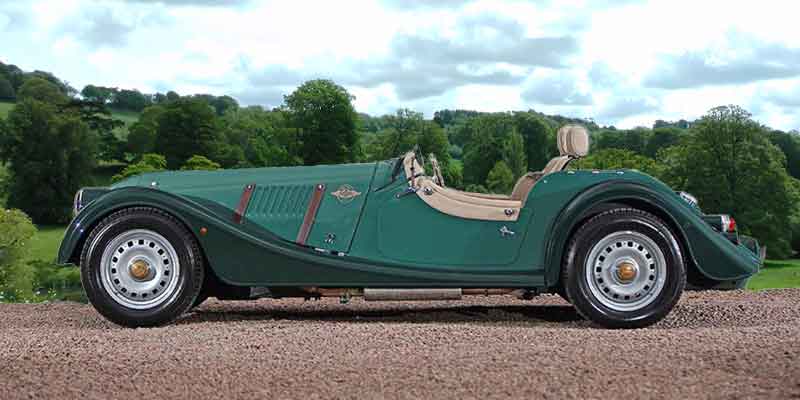 Morgan has never been a mass market car manufacturer. The fact is they have broken just about every rule in the car maker's book. The basic design of the car has never altered substantially for over 60 years, the frame is built of ash rather than steel or aluminium, much of the work is still carried out by hand. This just has to be a successful formula since the company is still in business, with a full order book!

Back in the 1930s Morgan was a tiny 'cycle car' manufacturer, building a small number of three wheelers with, typically, an exposed V twin engine at the front. The change to having four wheels and a four cylinder engine was an evolutionary leap forward for the company, hence the name 4/4.

It made it's debut at a Boxing Day London to Exeter trial; and subsequently, as usual, it was entered for many other competitions, in which it generally performed creditably, winning events such as the Ulster Grand Prix and the Leinster Trophy.

Powered by a 1122 cc Coventry climax engine it was reasonably fast, with a top speed of around 80 miles an hour, and exhilarating to drive; the ideal choice for the young pilot or army officer out to impress the ladies!

Sales held up well until war broke out in 1939, with a total of 663 open two seaters sold, along with 99 four seaters and 58 drophead coupes that actually had side windows!

Creature comforts were not a priority. Despite innumerable improvements and design changes over the last few decades the car was, and still is, as basic a design as it is possible to achieve; a true seat of the pants driving experience that Morgan owners relish.

Today Morgan cars are still hand built in their factory in Malvern in Worcestershire, just as they were when the original company began in 1919, and is still under family control. The company welcomes members of the public to come along for factory visits when you can watch the cars being hand assembled, you can rent a car from them to try out and you can even go down for afternoon tea! Try doing that at a Ford or Nissan factory.