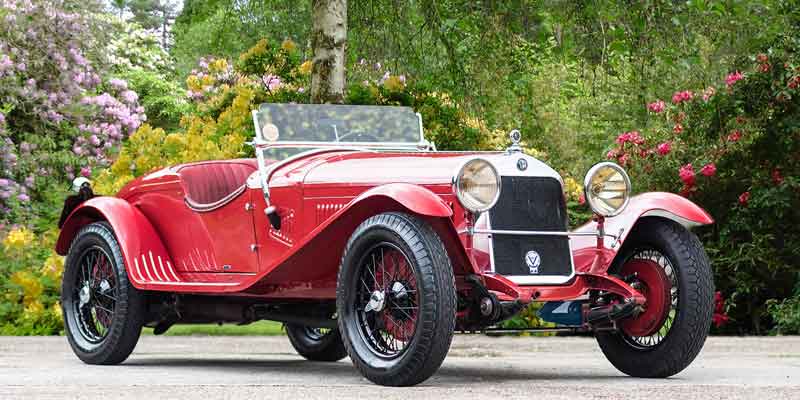 The Alfa Romeo 6C 1750 typifies the Italian sports car of the 1930s; light, fast, and exciting to drive.

The manager of the company's racing team; one Enzio Ferrari no less; took on board a young designer named Vittorio Jano who cut his teeth on the P2 Grand Prix car, and used many of the innovations in the road cars as well. The 6C was his brainchild which first saw the light of day in 1927 with a 1600 cc engine; this was replaced at the start of the 1930s by a 1750cc six cylinder in-line engine which pumped out far more power.

It was available in a range of options culminating in the top of the range format, which was supercharged and featured overhead camshafts (twin overhead camshafts in the Super Sport and Gran Sport versions). Producing 85 brake horsepower this pushed the car up to around 100 mph maximum speed with acceleration to match.

It sounded great, too, with a throaty growl from the engine and a raucous howl from the supercharger; just the sort of music to set the pulses racing!

The rest of the car wasn't bad either, with excellent handling, light steering and predictable roadholding so it was not long before it was winning plaudits in such major racing events as the Mille Miglia and the RAC tourist Trophy. In fact, in 1929, it came first in every major race that it competed in, including the Ulster TT, the Monza Gran Prix, and the Grand Prix of Spain, Belgium and Tunis!

Typically of the era, Alfa Romeo created the basic chassis, and then the proud owners would commission coachbuilders to finish them off. Most of them were built as open two seaters.

It wasn't perfect of course; the four-speed gearbox was a little tricky and needed careful handling to select the right gear at the right time; but there was little to touch it on the racetrack, or for roaring around the Italian country roads.

Altogether more than 2500 of these cars were built; not bad in the 1930s when most people could hardly afford a bicycle let alone a car!