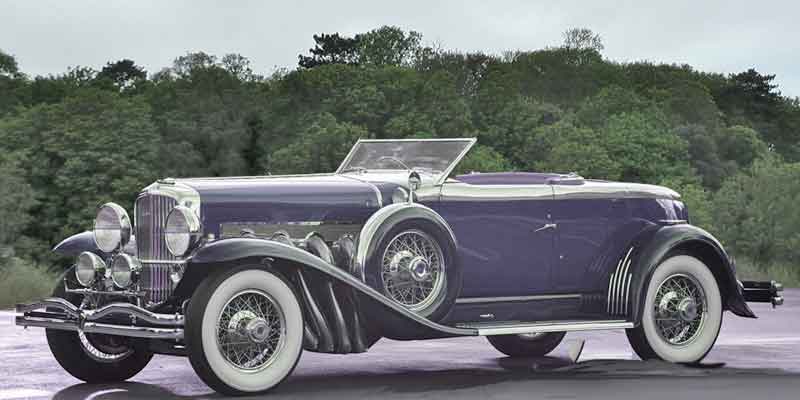 If you were a truly American multimillionaire in the 1920s you wouldn't buy a Rolls-Royce. After all it was too British. Instead you would treat yourself to the ultimate all-American motor car, theDuesenberg.

August and Frederick Duesenberg formed the company in 1919 and started manufacturing saloon cars. They had great success on the race tracks which gave them an excellent reputation. Unfortunately however car manufacturer is a otoriously difficult business to make money in, and by the 1930s the brothers had serious financial worries.

Along came the very wealthy entrepreneur, Erran Lobbard Cord. He already owned the car manufacturer bearing his own name, as well as the Auburn Automobile Company, which he had bought when it was proving unprofitable for its previous owners. This buyout was highly leveraged, in other words he borrowed a great deal of money against the security of the company's future cash flow.

As a very ambitious man he decided to do the same thing with Duesenberg. The brothers were overjoyed to see some money coming in and Cord demanded a luxury car that could compete with the likes of Mercedes-Benz and Hispano Suiza. By 1928 his wish was granted and the Model J was launched.

This car was driven by a huge 6.8 litre twin camshaft straight eight cylinder engine with 32 valves, producing 265 horsepower. With a supercharger fitted the car could reach 119 mph; ideal for out running federal agents or rival gangsters.

As usual the car was sold as a rolling chassis with the bodywork created by specialist coach builders. Some of the designs were, in this era of prohibition, a little over ostentatious to say the least; patent leather upholstery, heavily chromed petrol tanks, and secrets compartments for hiding illegal alcohol were amongst some of the lesser extravagances.

These cars cost a fortune. You could buy 40 or 50 complete Model A Fords for the cost of a single chassis, with coachbuilding costs on top of that. Fortunately, at the time, there was no shortage of super rich individuals who could afford to buy one.

Then came the stock market crash of 1929. It suddenly became hard enough to give a luxury car away, let alone sell one.

Cord had been very aggressive in keeping his empire afloat, which meant that he wondered a little bit too close to the limit of what was legal and what was not. Ultimately the United States Securities and Exchange Commission took out an injunction against him to prevent his stock manipulations, and his empire collapsed. He sold his shares but by 1937 the inevitable happened and all three companies ceased production.

Only around 200 of these Model Js were ever produced; as a consequence, if any of them ever come up for sale, they command a price in the millions of pounds.