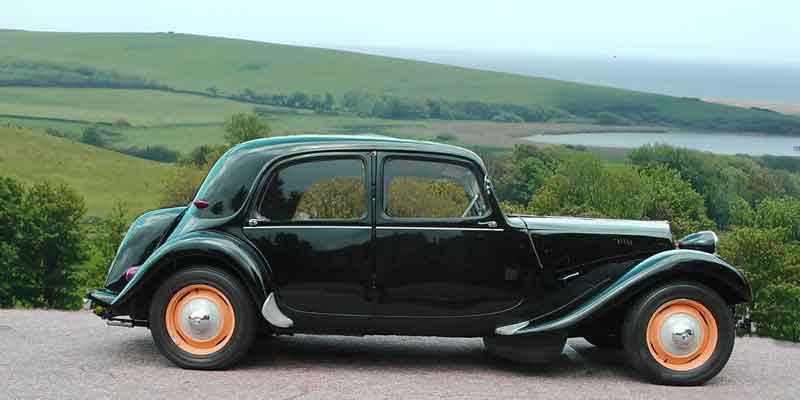 Citroen have never been afraid of innovation, and with their 7CV, or 'Traction Avant', they broke new ground in several ways.

Conventional wisdom of the day stated that cars should have an engine at the front, which allowed for a better weight distribution, but should be driven by the rear wheels. The company kept the engine in the front but used it to drive the front wheels; something which is common nowadays, but was quite revolutionary back in 1934. This meant that there was no prop shaft, which increased efficiency at the same time as allowing the car to be lowered further towards the ground . This lower centre of gravity made the vehicle much more stable with excellent roadholding.

The company also adopted a monocoque design, doing away with the traditional chassis; this meant that the car could be lowered even further giving it's familiar low slung appearance.

Innovation didn't stop there. It was fitted with independent suspension all round. The brakes were hydraulically operated. Rack and pinion steering, hitherto a feature of specialist cars, was adopted for the first time in a mass-produced car. Maintenance was made much easier than usual by the fact that the engine and gearbox could be easily removed from under the bonnet.

One of the greatest advantages of a monocoque design is a saving in weight, and subsequent improvements in performance and petrol consumption. Initially this design was looked upon with some scepticism by a number of doubters. To demonstrate the strength of the 7CV, one was actually driven over a cliff; the driver merely replaced part of the bonnet which had been knocked off and then drove the car away! All the doubts vanished.

This was a pretty revolutionary car in it's day but what is just as revolutionary was the fact that such a complex vehicle was mass-produced. This involved a huge financial gamble by Citroen and the coming of the Second World War didn't help, with production suspended completely in 1941.

After 1945 the factory was up and running again, although owing to post war shortages buyers initially had to provide their own tyres!

During the car's lifetime, until it was discontinued in 1957, a total of 760,000 Traction Avants were sold, spanning three main models, with engines ranging from 1300 cc four-cylinder right up to a 2867 CC power plant.

Perhaps the most famous owner was the celebrated fictional French detective Jules Maigret! Because there were so many manufactured, collectors have found them reasonably affordable and large numbers are even yet in regular use.