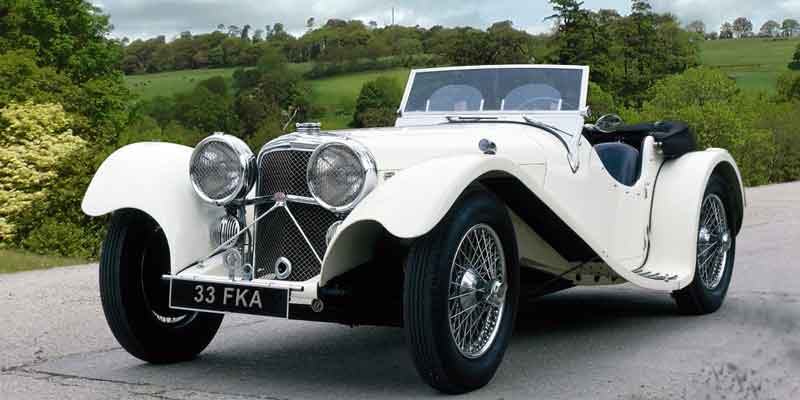 Jaguar cars was initially known as the Swallow Sidecar and Coachbuilding Company; commonly known as SS for short. After World War II these initials had a gory reputation because of the activities of the German Schuttstafel, and so a name change was in order; William Lyons like the sound of the name 'Jaguar' and so a new era began.

This was all in the future however when the SS100 made it's first appearance in 1936. This was the first time that the company had produced a real sports car, and it came at what was then a bargain price of just under £400; beginning a trend which Jaguar have carried on to this day, of producing powerful and charismatic cars at reasonable prices.

The SS100 was not meant to be a family car! With a highly tuned 2.6 litre six cylinder engine powering an open two seater it appealed to the sporting young man who wanted to take it on the road, preferably with a lovely young lady by his side, but still be able to race it occasionally.

It was mainly sold as a completed car, although a few left the factory in basic form only, so that the owners could commission coachbuilders to create something unique for them.

The car was capable of exceeding 100 mph, hence it's name (although admittedly a reviewer found that he could only achieve this with the windscreen down) with it's original twin carburettor overhead valve cylinder head engine, pushing out 104 brake horsepower. A 3.5 litre engine was introduced in 1938, raising this to 125 brake horsepower.

The combination of power and reasonable price made it very popular amongst competition drivers, many of whom put up creditable performances at the major race events of the time, including a motoring journalist who bought one of the first cars that were produced, and beat the hitherto all conquering Bugattis at the Alpine Trial in 1936.

Ultimately less than 200 of the 2.6 litre engined cars were sold, and just 116 of the 3.5 litre models. This rarity means that good surviving examples can now fetch high prices, and even replica models can be quite valuable.