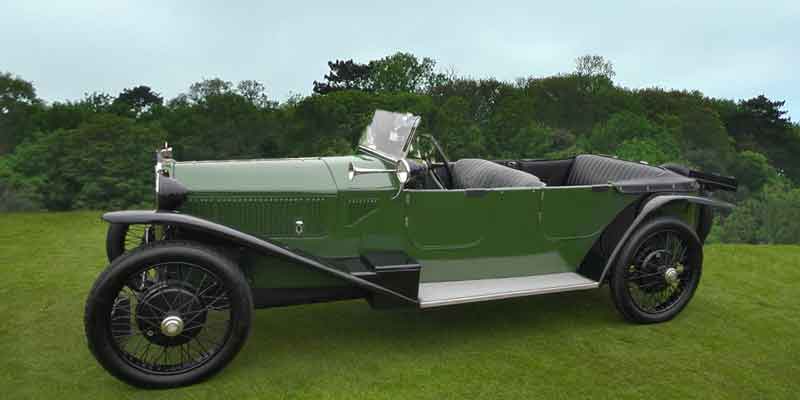 Most cars that come on the market are not really new models at all, but are improvements and modifications on previous models. The Lancia Lambda was different in that it was a completely new car with a totally fresh design.

Out went the traditional chassis, with the bodywork built on top of it. This had a monocoque construction. As a result the car was more rigid, lighter, stronger, and smoother to drive than previous models. The prop shaft was protected by a tunnel, running the full length of the underside of the car, which kept its safe and quiet. Traditional leaf springs were discarded in favour of a sliding pillar front suspension, with coil springs. The bench seats, instead of being added separately, were actually built into the car; this gave the bodywork extra stability.

The single overhead camshaft aluminium engines came in three choices; a 49 horsepower unit with 2121 cc, a 59 horsepower unit of 2375 cc and a 69 horsepower engine, with 2569 cc, all fed by single carburettors. These were built in a V4 configuration; this lowered the height of the engines sufficiently to allow the gearboxes to be fitted underneath them.

In keeping with the fashion at the time, bolt-on tops were available which allowed buyers a high degree of customisability; alternatively the more well-heeled could have their own unique designs created by coachbuilders.

Modifications and improvements continued apace and there were a total of nine different series; by the sixth series the monocoque configuration had been abandoned in favour of a stiff separate chassis, which allowed more choices for the coachbuilders to build unique creations.

Although these cars were designed to be saloons the versatility that the separate chassis arrangement provided enabled some owners to create more lightweight and sporty cars; a number of private owners raced in the Mille Miglia and achieved fourth and fifth positions.

By the ninth series the Lambda had morphed into a long wheelbase grand tourer with a 2.6 litre engine packing plenty of low down power; this was a large and comfortable vehicle designed for long-distance touring. Sadly by the time it was introduced Lancia had other models coming along, and by 1931 production of the Lambda came to an end.

Altogether a total of more than 13,000 of these cars were created, spanning all of the nine series.