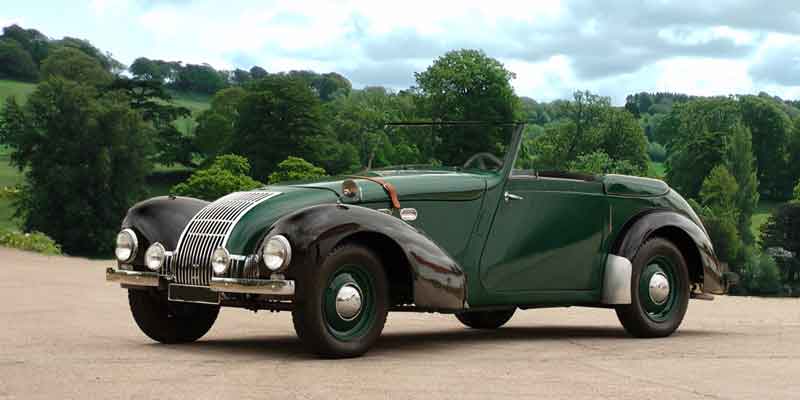 Sidney Allard was a natural petrol head. By the time he was at the tender age of 19 in 1929 he was already racing in a Morgan three wheeler; he then progressed to designing his own cars with, almost invariably, large Ford engines in lightweight chassis.

He was firmly of the opinion that racing success lay in lightweight cars with larger engines, giving a very large power to weight ratio. One particular person who was most impressed with his cars was Carrol Shelby, who raced Allards and used a similar formula in his own very successful Shelby Cobra.

During the Second World War Allard was in business repairing Ford vehicles for the British Army. He was very successful at this and at his peak employed around 200 people. When the war ended, though, he lost his single major customer; but he was left with a huge stock of Ford spare parts. He put these to good use by building two seater, open bodied sports cars, powered by large American V8 engines.

The K1 was built for the UK market only; an open two seater with a choice of either a 3.6 litre or a 3.9 litre V8 Ford engine. This not only gave a rapid acceleration up to a maximum speed of 90 mph, but also a great deal of torque at low revs, making it a real mile eater.

Sadly, as so often happened to car manufacturers, the company went bankrupt in 1957. This was not the end of Sidney Allard's involvement with motorsport however. He went on to win the Monte Carlo Rally at his first attempt, finished a very creditable third at Le Mans, and in 1962, four years before his death, he recorded the then fastest ever UK time over a quarter mile in a dragster he built himself.

Altogether just 151 K1s were built, of which about 20 still survive, most of which are in the USA.

On the night that Allard died, coincidentally a fire, probably started by arsonists, broke out at his old, dormant factory in Clapham, London, and destroyed it. These events didn't mean the end of the Allard name however; in 2018 Allard's son Alan began production of new models with modern equipment but emulating traditional designs.