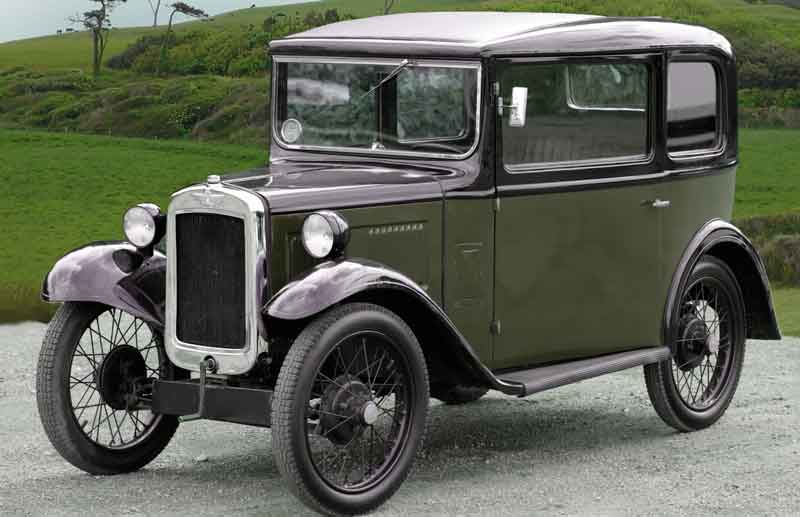 At the beginning of the 1920s Austin was in serious trouble. The company was in receivership and creditors were not happy. However founder Herbert Austin believed he had the answer; a small and economical family car, to compete with the motorcycle and sidecar combinations, and cycle cars that were very popular at the time.

He was the only person in the company who felt this way. If he was going to produce this car, he would have to do it himself.

Not a man to accept defeat, he converted the billiard room at his home into a design studio and brought in a young draughtsman, Stanley Edge, as his assistant. Between them they created The Austin Seven; often called the Baby Austin.

By 1922 they had built three prototypes at the Longbridge factory. The design was very basic; with a 750 cc side valve four stroke engine producing an RAC rated 7.2 horsepower and a simple A frame chassis. The braking system was somewhat rudimentary too; the rear brakes were applied by a foot pedal and a hand lever operated the front ones.

This was a tiny car with a wheelbase of just six foot three inches and a track of 40 inches. However this meant it was light; less than half the weight of the Ford model T. As a result the small engine was adequate to it's task.

And it was cheap. The launch price of £225 in 1922 fell to only £165 by winter of that year. Sales of cycle cars dried up completely and orders flooded in. In the first year of production nearly 2500 of them were sold.

Different variants were introduced. A lightweight two seater was raced in speed events, giving the car much more credibility to the buying public; as well as the box saloon there was an open topped version and even a van. What really got things moving however was licensing the design to other manufacturers throughout the world, and eventually, by the time production ceased at the beginning of the Second World War, around 290,000 of them had been sold to the UK market alone, with many more overseas.

Even William Lyons, of the Swallow Sidecar Company (later Jaguar Cars) built his own versions under licence; these sold so well that he had to move to new premises in Coventry. The Baby Austin therefore not only saved Austin itself, but went a long way towards making Jaguar the successful business that it still is.