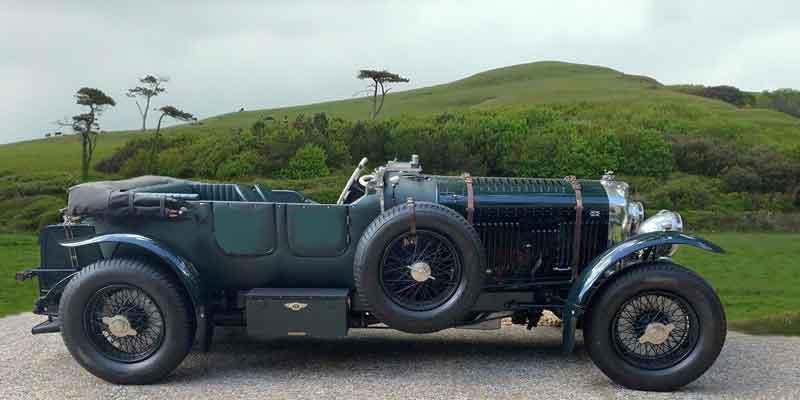 In Britain, in the early 1920s, motor racing was very much the province of the wealthy sportsmen and the car of choice was the Bentley. However, by the middle of the decade the three litre engine, which had provided such a great deal of success in the past, was starting to show it's age and upstarts such as Bugatti, Alfa Romeo and Mercedes-Benz were starting to encroach on the company's territory. A new engine was needed.

Unfortunately, designing and building a powerful car engine takes a lot of money and this was something that W O Bentley was a little short of. It was time for fresh investment.

Along came a gentleman called Woolf Barnato. He had been born with a silver spoon in his mouth, inheriting a great deal of money made from his family's gold and diamond mines in South Africa.

In 1925 he bought a three litre Bentley and raced it at Brooklands, winning many races. The previous year, in 1924, the Le Mans race had been won by Bentley owners and it was this that put the thought into his head that he should invest in the company. This investment came just in time to save the company from collapse and he effectively took control.

This extra money allowed W. O. To design and manufacture a new generation of cars, including a 4.5 litre engine which was reasonably successful in competition, but another of the 'Bentley boys', Sir Henry Birkin, believe that adding a supercharger to it would make it unbeatable.

W O was appalled. As designer of the engine he could prevent anyone from altering it's design but whether or not he could prevent anyone from strapping a blower to it was debatable! Barnato thought it was a good idea however and he held the purse strings. W O would still have nothing to do with it but Birkin went ahead anyway and commissioned the construction of five racing cars with superchargers. Eventually a total of 55 of them were produced, in order to comply with the Le Mans entry requirements; five of these were intended for racing, and the other 50 for road use.

The increase in power that the blower created was impressive, pushing the normally aspirated engine from 110 horsepower to as much as 240 horsepower. The problem was that this was stressing the engine to extremes that it simply wasn't designed for.

The Bentley Blower never won one single road race. It simply wasn't reliable enough. On the other hand the standard 4.5 litre normally aspirated engine continued to win plaudits, since it was tough and well engineered.

W O had been right all along. Nowadays,this beast of a car, being such a rarity, can command prices well into the millions of pounds on the very rare occasions when they come up for sale.